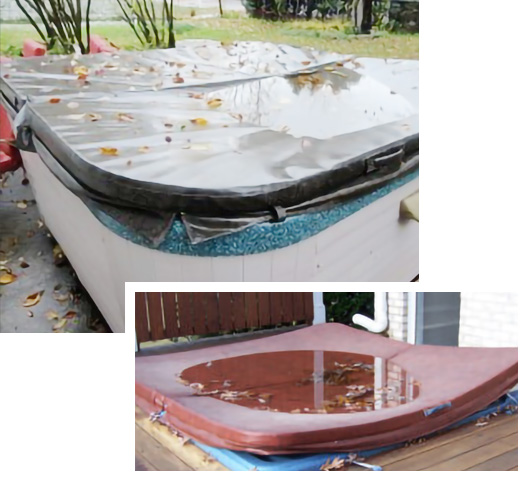 All traditional rigid foam hot tub covers will end up saturated or broken. It’s not you, it’s them. Bad enough on a regular size hot tub, on a Swim Spa a Heavy covers can be downright dangerous. That’s why SpaCap swim spa covers were designed.

It’s Not the Rain…

Rain is not what makes the foam heavy. It’s the steam coming off the hot tub water under it. The steam works into the foam and then condenses. The water molecules are bigger and get trapped. The swim spa covers slowly get heavy. It doesn’t matter how thick or how slanted the foam is. If it was the rain that made the covers heavy putting a roof over the hot tub would keep the spa covers from getting heavy.

At SpaCap.com we build Hot Tub Covers and Swim Spa Covers that are lightweight, easy to use and built to stay that way. Even on larger swim spas most women can remove our swim spa covers with one hand. Imagine how much more you would use you spa if you didn’t dread wrestling heavy spa covers. 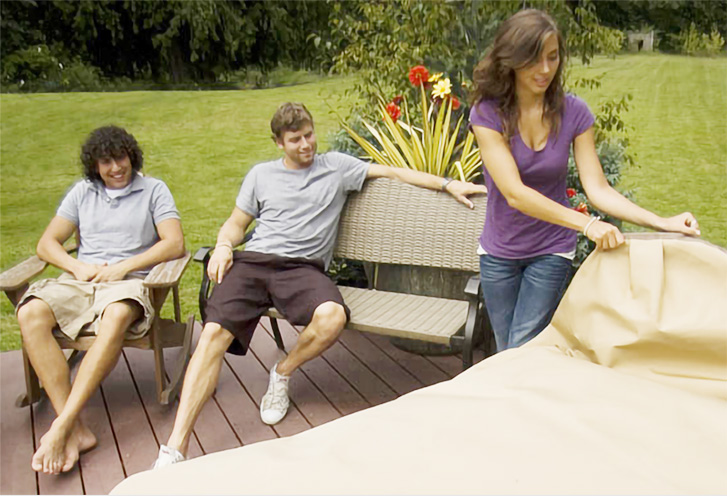 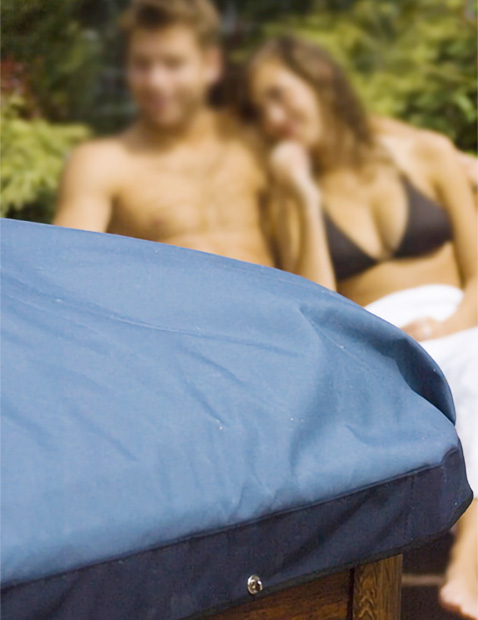 The Mother of Invention

Years ago, a woman that had been in a car accident was told by her doctor that she needed to get into her hot tub every day for therapy, but not to lift more than ten pounds.

She went out and looked at her heavy foam-filled cover and thought, ‘there has to be a better way’.

She came up with a cover she could handle herself. Once her neighbors found out what she had come up with, they wanted her to build one for their own hot tubs.
That was the 1970s. We’ve been building hot tub covers ever since.

Over the years, we’ve made some improvements, but we build each cover like it was going to be on her spa.

Hot Tub manufacturers are constantly adding new models and styles. We have been building Hot Tub Covers and Swim Spa Covers for so many years we have seen models come and go. But don’t worry, we can build a cover for your spa even if they don’t make it anymore.

Let Us Build You One

Traditional hot tub covers all using foam and claims the R-value of that foam as it's insulation value. But that rating is specific to the foam being used in a dry environment! It does not apply when the foam is used in a wet environment, say over a steam supply.

SpaCap Swim Spa Covers and Hot Tub Covers don't use foam, so there is nothing to suck up the steam.

That means there is nothing to get heavy.

SpaCap hot tub covers let you enjoy using your spa without throwing out your back.

Ever been injured by your heavy hot tub cover? It even becomes more likely when you add the height of a swim spa and the number of sections required to cover it.

For Pricing on Swim Spa Covers, you can call or go to the Order page and put in your measurements.

It will give you pricing based on size and options before it asks for any personal information.

One of our customers related how his previous traditional foam-filled hot tub cover had nearly killed him. He was checking the chemicals in his spa. Rather than attempting removing the entire waterlogged spa cover, he decided to just lift one side enough to get at the water long enough to get a sample. He bent over and supporting the heavy cover with his left arm while attempting to fill a sampling bottle with water from the spa.

As he leaned over further, the weight of the heavy spa cover dislocated his left shoulder and allowed the cover to hit him on the back, knocking him into the spa. He was now face down in the spa with his legs pinned to the spa by the weight of the spa cover. His shoulder was dislocated, and unlike the Mel Gibson character in Lethal Weapon, he was in agony because of the pain. He tried to move but could not budge the weight of the waterlogged cover.

He began to choke as he swallowed spa water and tried to rise up but could barely get his head out of the water. With what could have been his last breath, he screamed for help. Fortunately, he had left the door from the house to the deck open. His daughter and her boyfriend heard the commotion and looked out to see his legs sticking out of the spa cover.

They were able to lift the cover off of his legs and pulled him up from the water. They took him to the emergency room where they put his shoulder back in place and treated him for a shock.

This man had owned a hot tub for 12 years and had replaced 3 conventional rigid foam core spa covers. While the life on the foam covers had averaged from 2 to 4 years, regardless of manufactures' claims, all the covers became waterlogged.

Another woman told us how she and her husband were in the hot tub with their heavy foam hot tub cover propped up against the wall. A gust of wind hit the spa cover and it suddenly fell, hitting her husband on the head. The blow was hard enough to push them both under the water. Fortunately, they were not trapped, and they both recovered quickly, or so they thought.

A couple of days later, the left side of her husband's face suddenly went DEAD. He had no feeling, sensation, or movement. Naturally, they both were quite frightened and thought he had suffered a stroke.

They rushed immediately to the hospital, where the doctor diagnosed him with Bells Palsy, which can be caused by stress and or trauma like a heavy spa cover hitting him on the head. He later made a full recovery. He was extremely lucky.

Here is something you will never hear from a foam spa cover dealer. Every year people are injured by foam hot tub covers. Most of the injuries have come from a gust of wind blowing the heavy foam cover onto people as they use their spa. Sometimes people attempting to carefully maneuver a saturated foam cover off their spa have lost their grip and had the hard foam cover slam down, breaking the arch of their foot.

Something That Will Never Happen With a SpCap Hot Tub Cover.

If you're tired of getting beat up by your hot tub cover, it's time you get a SpaCap.
There are many different hot tub manufacturers that are building swim spas, and there will be more as time goes by. However since we custom build all the covers, we make you can rest assured that we can build a cover no matter the brand.